Upton’s Heath’s association with the Shakespeare Schools Festival continued in November when year 6 pupils performed ‘A Midsummer Night’s Dream’ on stage at the Floral Pavilion.

Year 6 performed an abridged version of the famous Shakespeare play to an enthusiastic audience. Past Shakespeare plays undertaken by Upton Heath pupils at the Festival include Richard III.

Year 6 teacher Miss Hannah Williams said: “The Shakespeare Schools Festival is a brilliant enrichment opportunity for our children, enabling them to perform Shakespeare on a professional stage. Pupils develop the skills of performance but also essential life skills such as confidence, self-esteem and team work.”

“Shakespeare can often be perceived as being inaccessible for primary school age children, but our pupils’ enthusiasm for the Festival each year shows that isn’t the case. Every child who wanted to take part had the opportunity to do so, and I was very proud to watch them up on stage showing that Shakespeare can be for everyone.” 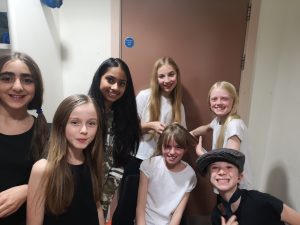